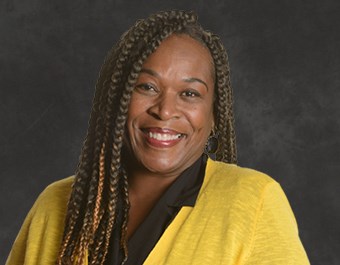 Stephanie Anthony is the director of the Office of College Access Initiatives. In this role, she supervises a team of professionals in the operation of several pre-college programs. Each of the programs is geared to the support and preparation of underrepresented youth for success in post-secondary institutions. Programs that fall under her purview are Educational Talent Search, Upward Bound, King-Chavez-Parks and Gear Up. Dr. Anthony joined University Outreach and Engagement in 2020 after having directed the Upward Bound of MSU program since mid-2017. Prior to taking on the role of director and program coordinator for the Upward Bound program, she worked in the MSU College of Human Medicine. There she coordinated and supported the efforts of a Michigan-based study in a joint reentry research project with Brown University. The research was conducted with incarcerated women in Michigan’s prison system as a collaborative effort with the State of Michigan’s Correctional Facilities Administration. As a fixed term faculty member having taught in the MSU College of Human Medicine’s Public Health Division, she taught public health policy. During this same period, she concurrently served as an admissions interviewer for aspiring medical students within the College of Human Medicine and as a mentor to many local area youth.

Prior to joining MSU in 2015, Dr. Anthony worked with the Consumer Protections Division in the Office of the Michigan Attorney General. There, she traveled throughout Michigan for ten years working primarily with K-12 youth in educational systems to promote healthy behaviors, student safety, and leadership. A former two-term elected official for an urban school district in the State of Michigan, she has been an advocate for students, educators, and the community for twenty-plus years. As a board member, she has held several leadership positions including that of board president, treasurer, and secretary. Dr. Anthony is devoted to service for the underserved and throughout her professional life has worked diligently in those arenas that allow her to fulfill her purpose. These have ranged from her counseling work with at-risk youth and other vulnerable populations, to her work in the substance abuse field as a drug court manager and methadone clinician, and lastly in her work as a master’s level psychologist. She is an elected at-large member of Michigan State University’s Academic Governance Steering Committee and serves both as a faculty senator and a representative of MSU’s University Council. Key collaborations with longstanding community organizations such as CAPCAN of Lansing and the Lansing Promise represent the valuable partnerships that she focuses on in ongoing efforts to benefit Lansing area students and to prepare them for post-secondary success. Anthony and her team are also focused on the development of collaborations statewide to support underrepresented students. A member of numerous organizations, she works each year as a judge for the Michigan Historical Society’s statewide student history competition and also serves on the Board of the Greater Lansing Women’s Center.

Raised in Flint, Michigan, Dr. Anthony is originally from West Palm Beach, Florida. She holds a bachelor of arts degree in communications from Michigan State University and a master’s degree in counseling psychology from Cambridge College. She attended Harvard University for master’s studies in liberal arts with an emphasis in psychology and completed her doctoral studies in educational leadership at Fielding Graduate University.